Kathy Griffin Questioned by Secret Service for More Than an Hour 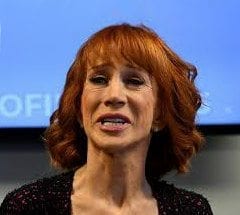 – News from elsewhere covered by Quincy Quarry News with commentary.

Kathy Griffin was reportedly interviewed by Secret Service agents for more than an hour on Monday.

This interview of the at best C list celebrity would appear to have been conducted as a part of a federal investigation into her infamous photo in which she’s holding a likeness of President Donald Trump’s bloody and severed head.

Quincy Quincy loves snarky satire as much as anyone.  The Quarry is also a staunch defender of the First Amendment.  It even has some appreciation for Performance Art; however, even the Quarry agrees that Ms. Griffin went over the line.

Way over the line.

As such, the Secret Service has to do what it is obligated to do.