Representative Tulsi Gabbard said she has long worked for the best interests of the country whether in the military or in Congress and thus could not in good conscious vote either way. 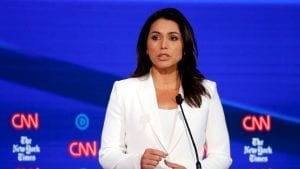 A force to be reckoned with in the future?
Image via USA Today

While the often bloviating statements by members of United State House of Representatives both before and following yesterday’s impeachment vote by house members gave rise to a day that no one is getting back nor likely to actually do anything to truly address the long ongoing dysfunctionality of politics in Washington DC, one Democratic member of the House of Representatives from Hawai’i summed up things both cogently and eloquently with a pox on both sides of the house denouncement.

People hate it but this is a legitimate position to take. https://t.co/NSg7QQYX5f

Source: Tulsi Gabbard on Trump impeachment: ‘I could not in good conscience vote either yes or no’