Baby Moose once on the loose is now a star at Maine Wildlife Park! 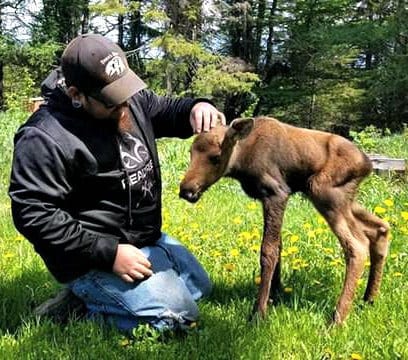 Maggie hitting the bottle
Still from video via NECN

A baby moose once on the loose is now a star at Maine Wildlife Park!

Earlier this month, Shannon Lugdon heard the moose calf crying and saw her wandering on her property in Wallagrass, Maine and which is roughly ten miles from the Canadian border.

“We’ve been taught from a young age that you don’t interfere with (wild animal, ed.) babies, but mama moose never came back.” said Ms. Lugdon.

Worried about the abandoned newborn, the Lugdons called wildlife biologists and who responded within minutes.

They tried to moving the moose calf close to a nearby brook, hoping her mother would eventually come for her – but no luck.

There was, however, some early good news: the Lugdon family’s dog Leo befriended the little moose, now known as Maggie.

When mom did not return, Maggie was taken into protective custody by the state and moved to the Maine Wildlife Park in Gray MA, roughly twenty miles north of Portland, and where she has become the star of the park.

Maggie the moose is only 22 days old but growing fast!! pic.twitter.com/EfgsJqtC2I