It's over: Yogi Berra enters eternal Hall of Fame 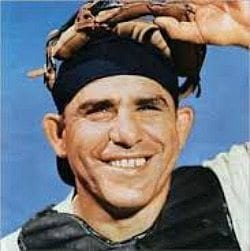 – News from elsewhere spotted by the Quincy Quarry News
Baseball Hall of Fame member, all around good guy and rumored public speaking role model for the long time mayor of Boston Tom Menino, Lawrence Peter “Yogi” Berra passed quietly in his sleep on Tuesday at the age of 90.
Berra did it all, from catching a 22 inning game to catching the only perfect game in World Series history, hitting to all fields,  to participating in all manner of charitable and civic endeavors to offering up innumerable “Yogoisms” as well as inspiring others more attributed to him.
For example: “Always go to other people’s funerals, otherwise they won’t go to yours.”
One can thus only expect a huge throng of well-wishers at Yogi’s funeral.
That and how the world will be a lesser place with the passing of a truly great human being who also once was quite a gamer in the game of baseball.
QQ disclaimer
]]>