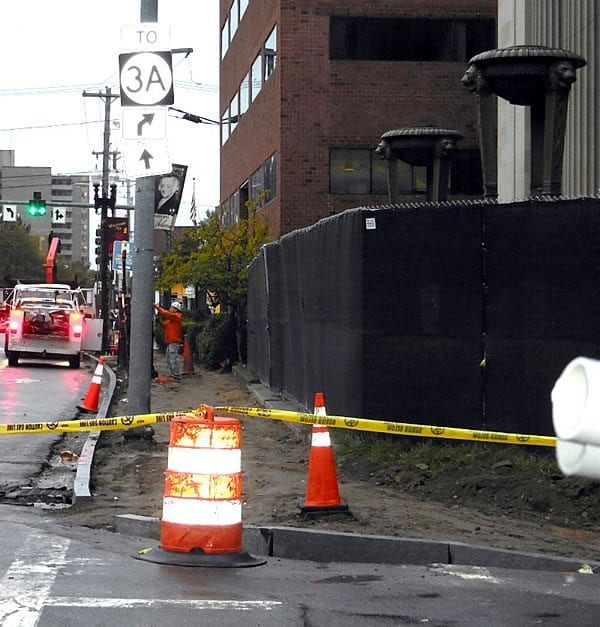 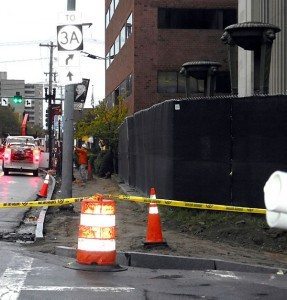 Quincy Center’s Hancock Street realignment looks to be running at least a month behind schedule as per
a previous featured announcement on the City of Quincy’s website.
Even more troubling, instead of City Hall’s announcement that sidewalk replacement would commence on September 22 on the western side of Hancock Street near its intersection with Dimmock Street, sidewalk replacement work only just this week instead commenced on the opposite side of the street in front of the burned out Masonic Temple.
Repeated calls by concerned nearby business owners to the City of Quincy’s project liaison person for a status report on pending sidewalk replacement and other work in front of their storefronts have yet to enjoy the courtesy of a return call.
With the winter holidays season fast approaching, many of these same businesses are concerned as the holiday season is their prime sales time.
Now, however, these local small businesses are becoming increasingly concerned as the project appears to be falling further behind schedule, past assurances by city officials that they would not be unduly impacted are ever-increasingly looking suspect, the Koch Maladministration failure to bother to secure all but standard business interruption assistance funding for Quincy Center businesses impacted detrimentally during construction, and given that the end of the construction season is fast approaching.
It further must be noted that even the project’s start date was delayed because city officials failed to host a required community meeting in a timely manner before the project could commence.
Only time will tell how many more businesses in Quincy Center will close up shop given all manner of lingering problems with Mayor Koch’s currently foundering Quincy Center redevelopment plan.