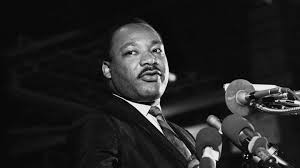 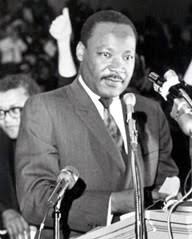 Excerpted from Reverend King’s final speech in Memphis Tennessee on April 3, 1968 — the day before he was assassinated.

“Well, I don’t know what will happen now.

We’ve got some difficult days ahead.  But it doesn’t matter with me now.  Because I’ve been to the mountaintop.  And I don’t mind.

Like anybody, I would like to live a long life.  Longevity has its place.  But I’m not concerned about that now.

I just want to do God’s will.  And He’s allowed me to go up to the mountain.  And I’ve looked over.  And I’ve seen the promised land …

… I may not get there with you.  But I want you to know tonight, that we, as a people, will get to the promised land.  And I’m happy, tonight.  I’m not worried about anything.  I’m not fearing any man.

Mine eyes have seen the glory of the coming of the Lord ©.”

This is one of the better examples of how he actually spoke. You get the language of the pulpit but also the coolness of the pastor in the front room, the teacher and politician. It is what used to be called rhetoric. pic.twitter.com/JQ8QkBjcWD