Lamb on the lam in Mansfield 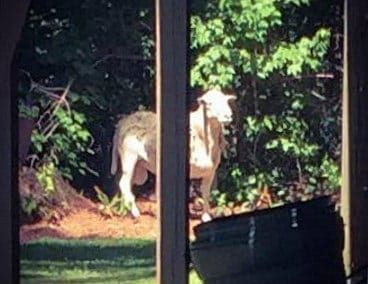 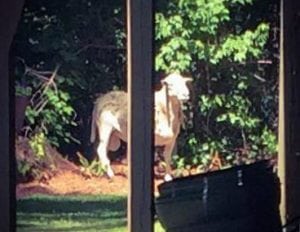 A peeping ewe
Image via the Mansfield Police Department

Lamb on the lam in Mansfield.

Mansfield Police officers were engaged in a dramatic but unsuccessful chase Sunday morning in East Mansfield.

The ovine suspect ultimately slipped away.

Fear of ending up as lamb stew surely fueled her fleeing.

MPD officers were engaged in a dramatic pursuit earlier this morning in East Mansfield. The suspect ultimately slipped through our fingers, but we wanted to share this heart-stopping footage with you all. ACO Collins and Officer Anthony "Jukes" Lattanzio came close to corralling the evasive ovine but ultimately came up empty. The sheep, who eloped the New England Rodeo Friday, was last seen headed into the woods around Essex/Ware. She is most likely tired and scared. If you see her, please call the rodeo directly at 508-858-1102 and then let us know!#lambonthelamPoliceOne.com

The sheep escaped from the New England Rodeo Friday and was last seen headed into the woods around in the vicinity of the intersection of Essex and Ware Streets in Mansfield.

She is most likely tired, scared and capable of head butts.  As such, if you see her, please call the rodeo directly at 508-858-1102 and let it handle things.