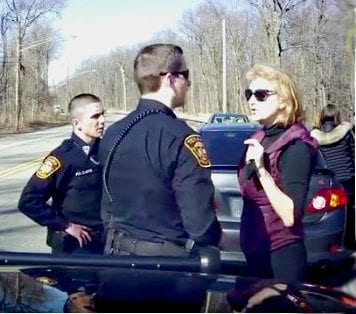 In a pluperfect example for police officers why cop cams can prove helpful to covering their tukas, Ms Turner is seen on video bragging to cops that she is a Port Authority commissioner and saying she was friends with the mayor of Tenafly, New Jersey.

In other words, a variation on “do you know who I am” and punctuated liberally with F-bombs.

Among other things, Ms. Turner was livid that the officers on the scene would not tell her why a car with her daughter in it has been pulled over by police.

Apparently, while a graduate of Georgetown University’s law school, Ms. Turner apparently forgot that police officers are proscribed from discussing with others why they are holding people.

Turner, who lives nearby, arrived on the scene in her own vehicle just as police were finishing up ticketing the driver of the car in which her daughter was a passenger for violations that included failure to have a current insurance card, driving an unregistered vehicle and driving with the license plate obscured.