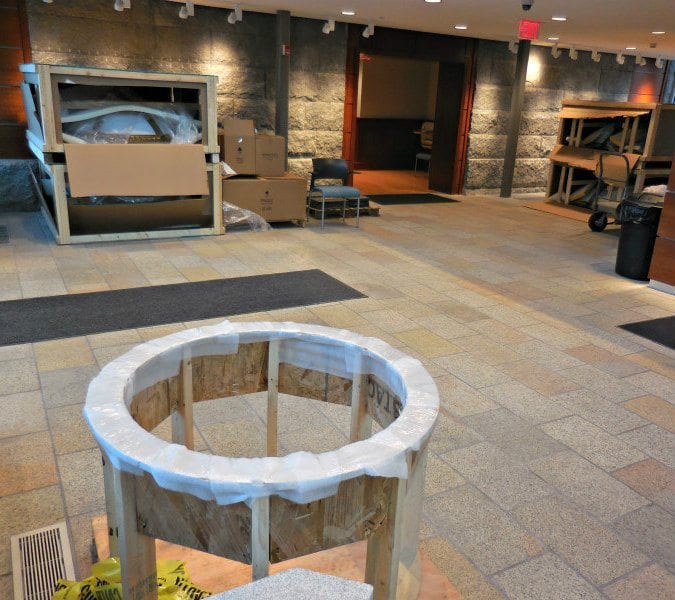 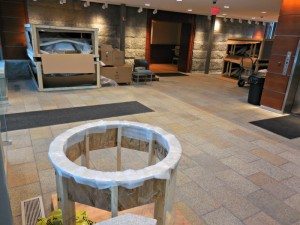 – News about Quincy from Quincy Quarry News
Quincy’s Old City Hall remodeling project is still not finished.
After spending $12.7 million remodeling Old City Hall – almost twice the originally promised no more than maximum cost – plus who only knows how much more was paid out by the project’s insurance company in the wake of still unsolved September 2014 arson fire, the remodeling of Old City Hall is still unfinished three months after it was opened per all but assuredly but a temporary occupancy permit issued by the City of Quincy. 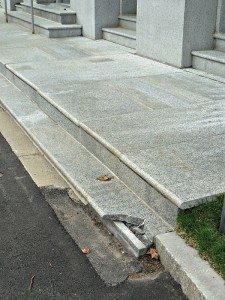 Much of the work appears to be more on the order of “punch list” fixes per the photographs taken by Quincy Quarry in recent weeks.
For example, Quincy Quarry has recently photographed several sizeable but inexplicable pallets of building materials and other unfinished items in the new interconnect structure between Old City Hall and the glass-walled New City Hall wherein all City of Quincy City Hall so-called public servants actually have their desks as well as where they are purportedly said to work.
Additionally, one can readily see broken steps in front of Old City Hall that are not duly cordoned off to protect the public as well as local taxpayers from having to pay for injury claims given such flagrant negligence.
Further troubling is the considerable number of actual paper punch list worksheet checklists that have been posted throughout Old City Hall. 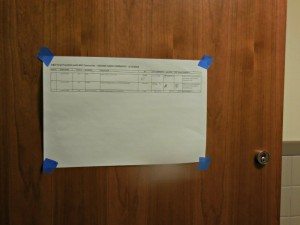 Per the Quarry’s checking with its well-experienced as well as truly capable real estate development experts, usual industry standard practice is to expect that punch list items be resolved within a month or the construction contractor is subject to financial penalties until the needed fixes are completed.
What is particularly odd about this extended delay in wrapping up the Old City Hall’s very expensive but remodeling project is that as no city workers are assigned to work their workweeks in Old City Hall, there are thus no city workers in the way of the contractor’s workers working on all manner of still unfinished work. 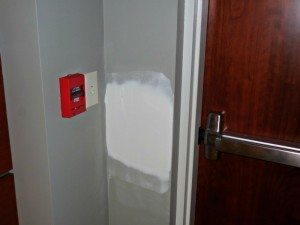 Regardless, all manner of needed fixes are still pending – if not also far from – completion.
Typical construction industry problem spot marking blue masking tape fix-it item taggings are everywhere throughout the building.
Further, the problems include such things as substantial repainting work as opposed to merely just taking care of dings.
Further yet, one can only properly have concerns about work done below the surface.

A City on the Move?
A Quincy Quarry News file photo

For example, in an entirely unplanned quality control check, the Quarry discovered that it took at least two flushes to clear out the yellow and four flushes to see the brown go down in the only toilet on the second floor of Old City Hall.
Additionally, while there was toilet paper in place in this unisex one holer, there was no soap in this bathroom’s soap dispenser, much less was there any indication whatsoever that there ever had been any at the time of this impromptu plumbing quality control check.
Also troubling is that there is only thus single unisex bathroom on the second floor of Old City Hall and venue of the City Council chambers. 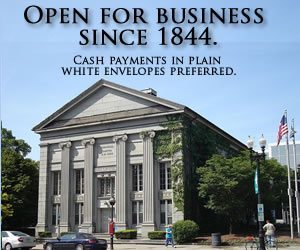 Per the Quarry’s building code expert resources, on the order of four – or more – toilet fixtures would appear to be required per building code absent a local waiver of the building codes by the City of Quincy’s Inspectional Services Department.
While – admittedly – the Quarry did find two sets of bathrooms on the first floor of the building, a straight read of the code would likely require these facilities to be necessary to meet the first floor needs, not to mention that their floor of separation from the second floor City Council chambers would all but assuredly present impediments to considering the bathrooms on the first floor as available for use on the second floor given the federal Americans with Disabilities Act.
Clear and troubling concerns notwithstanding, for reasons obvious Quincy Quarry saw no point to subject itself to all manner of all but certain lengthy delay by city officials if it were to seek to review the Public Records that are the construction and permitting documents for this project.
Quincy Quarry readers can, however, rest assuredly that it will continue to expose the shortcoming of the Koch Maladministration when and as it continues to Q-up.
QQ disclaimer
]]>