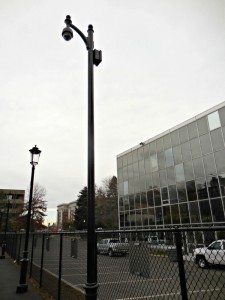 – Quincy News from Quincy Quarry News
Quincy City Hall new streetlights to address security and trafficking?
The twenty new as well as surely expensive ornate cast iron street light poles behind City Hall along the walkway next to the MBTA tracks now also feature three hundred and sixty degree video cameras.
As for how expensive, Quincy Quarry has obtained construction professional cost estimates running upwards of $200,000.00 or thereabouts in total to complete this street light trafficking project as it has long known better than to bother to ask the Koch Maladministration for any project cost data.
Regardless of the actual cost, one can only assume that the new cameras were installed to enhance both City Hall and especially City Hall VIP and VIP parking lot security, especially from their exposure by Quincy Quarry camera crews during snow plowing season.

A City on the Move?
A Quincy Quarry News file photo

Whether – or not – the new lighting and video surveillance equipment might also mitigate outdoor libation enjoyment and recreational pharmaceutical sales along this thus well-trafficked pedestrian traffic way remains to be seen.
Also forever to be unknown is whether – or not – this massive security upgrade could have yielded a positive benefit had it been in place when old City Hall went up in flames almost 14 months ago in a suspected arson fire and which to date no suspect has been at least suspected, much less identified.

Quincy Quarry considered reaching out to City Hall to inquire when it planned to do something in front of City Hall as well as how it planned to pay for Quincy Mayor Thomas P. Koch’s grandiose plans for a thirty million dollar acre and maybe a half long-touted Adams Green green space between City Hall and the Church of the Presidents after the Hancock Street misalignment project might finally be completed.
However, the Quincy Quarry City Editor sagely reminded the Quarry staff that the Koch Administration is now surely looking forward to working upwards of four years of playing the Delay Game in response to most any and all valid inquires made of it.
QQ disclaimer