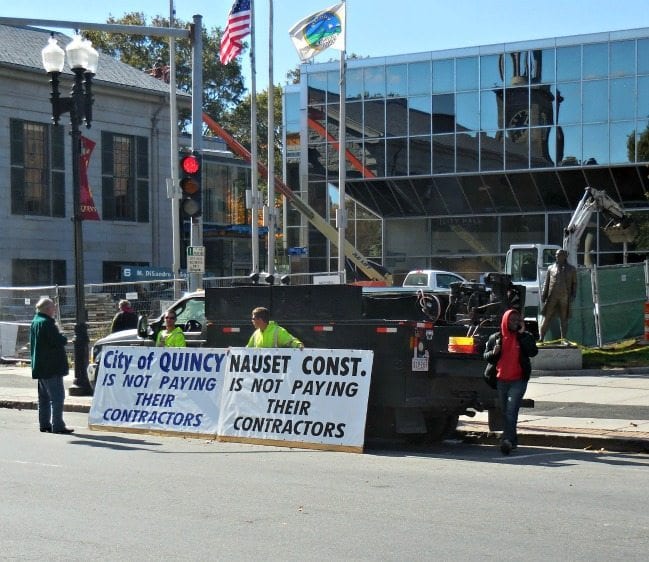 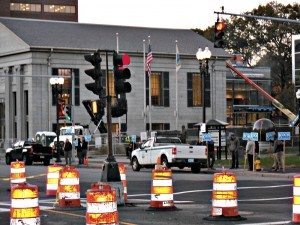 – Quincy News from Quincy Quarry News
Quincy Koch campaign sign trafficking continues to go down?
As election day approaches and in the wake the embattled incumbent Mayor Thomas P. Koch thumpings in not merely one, not two, but three publicly available sets of polling data showing massive as well as statistically consistent percentages of local voters lining up against the embattled incumbent, campaign sign holding for him also appears to be waning while it conversely appears to be waxing for his apparently surging opponent.
For example, on a recent morning during the morning commute, the free spending and record spending going away Koch campaign could only manage to field but perhaps a couple handful of its coat holders to stand out holding Koch signs during for the morning commute trafficking in front of City Hall.
As it was a perfectly lovely fall day, so much – apparently – for fair weather friends. 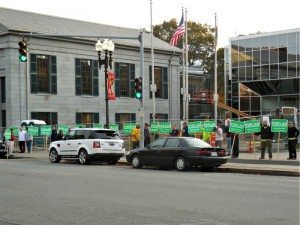 Conversely, the embattled incumbent’s opponent was able to fully line the sidewalk in front of City Hall with his supporters during a recent evening commute, not to mention were out and about at a time when people are more likely to be fully awake and thus perhaps also more likely to notice this show of support in front of the long fenced off bastion of the embattled incumbent.
As such, will there be similar lines of support in voting booths on election day for the challenger or will the incumbent manage to buy his way to yet another term?
Expect Quincy Quarry to cover this long ongoing local saga in its own inimitable and no holds barred fashion.
QQ disclaimer
]]>