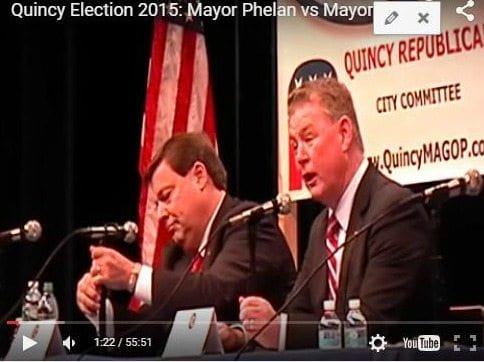 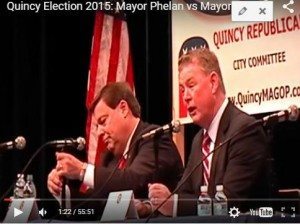 – Quincy News from Quincy Quarry News
Quincy High Quincy mayoral campaign debate video available online.
The Quincy Taxpayers Association recorded this debate as well as all of the major Quincy mayoral race debates and posted them on its YouTube channel as a community service.
As such, locals can stream any or all of the mayoral debates at anytime rather than staying up late to catch one of the not exactly frequently scheduled cablecasts of but some of these debates on Quincy Access Television (“QATV”).
For reasons utterly inexplicable to Quincy Quarry’s extensive technical expertise, while QATV has loaded up all sorts of videos for on demand viewing, including all sorts of usually rarely viewed silly ones that were probably made on the clock during the workday by City of Quincy Director of Waste Management and thespian wannabe for viewing 24/7/365, it has failed to make the actually important mayoral debates similarly available for local residents.
In short, so much for providing actual community access television . . .
In any event, click on YouTube below to see this week’s debate at Quincy High School or here to find links to the other mayoral debate face-offs.