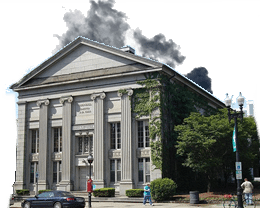 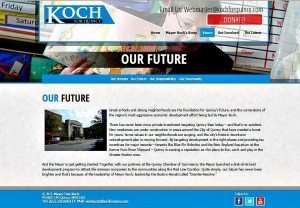 Quincy’s tragic past miscast as prologue?
A Koch for Koch website errant image
Click on image to see a clearer image

While apparently the Koch Maladministration’s designated as well as variously mostly known monitors of Quincy Quarry stories appear to have finally picked up on this Q-up previously reported in the Quarry and then eventually the Koch campaign trafficking team endeavored a fix, new problems have Koched up on the Koch for Koch website.
As near as the Quincy Quarry technical team could tell, only the online contribution page appears to be without obvious problems other than perhaps potential shortcomings in assuring the comprehensive security of online contributors’ personal financial accounts information.

Considering that upwards of five figures of (reported, ed.) Koch for Koch campaign “contributions” have been paid out to a unit of the Patriot Ledger’s parent company to develop and then supposedly maintain the Koch for Koch e-media, one think that given these considerable fees paid and assumed local knowledge such glaring Q-ups would not happen.
But they have.
As such, theories abound as to why such ultimately inexcusable problems are increasing on what is ultimately a rather simple – however expensive – website.
Obviously, one theory is that the problems are payback stealthily inflicted upon the duly embattled incumbent.
Another is that perhaps New Media is farming out the work to India and the foreign workers so used thus haven’t a clue about the Q.
More likely, however, is that Koch Maladministration officials are yet again calling the shots on things which are way over their heads. 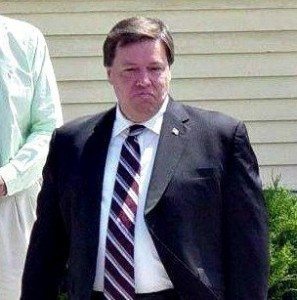 Regardless, as previous Quincy Quarry exposés of Koch for Koch shortcomings have on occasion resulted in attempts to fix the so exposed problems, one can only reasonable expect that this latest exposé will cause further discomfort at the Koch for Koch headquarters, if not also for at least some parties at its expensive but so far less than meticulous social media vendor.
This time, however, the Quarry will not be providing any specific particulars on these new Q-ups on Koch for Koch e-media and so not make them easy for Koch traffickers to identify and then perhaps actually fix.
QQ disclaimer
]]>