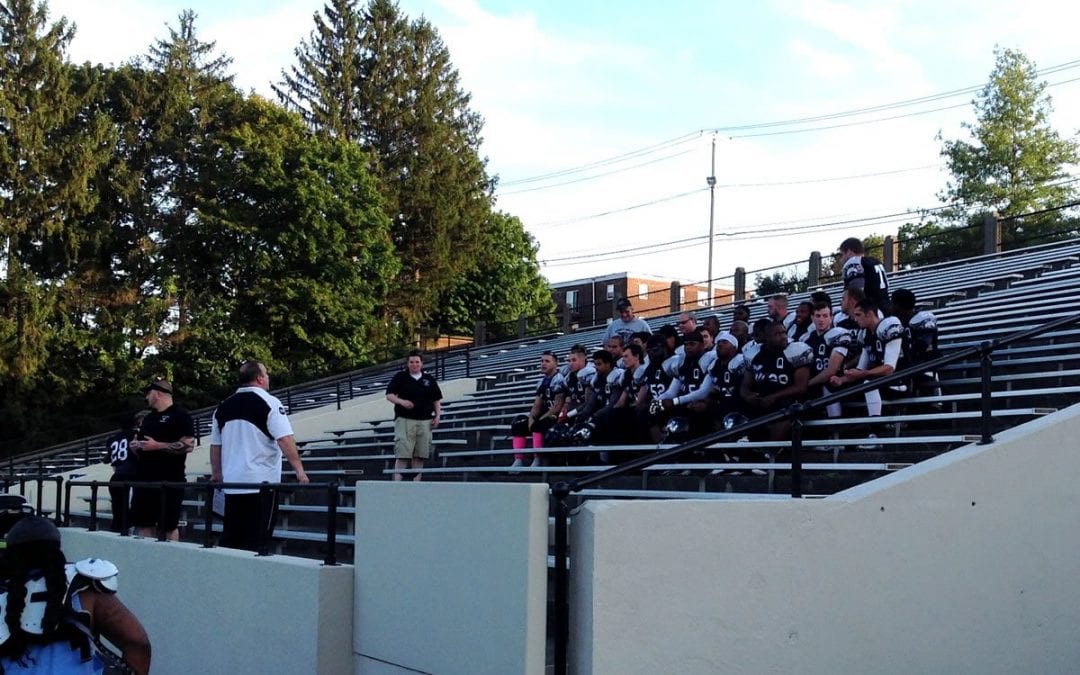 The Quincy Militia lost to the Worcester Mass Fury Saturday night in their final home game of the season, falling to 3-4 on the season. The 7-1 Mass Fury took control of the game in a decisive second half, and held on to win 20-12 despite two late pushes by the Militia.
I, for one, had a great time though, and found the crowd quite friendly. I was approached right away by a man carrying a plastic bag filled with Bud Lights who shook my hand and welcomed me to the game.
The game got off to a slow start, with most of the crowd not arriving until the middle of the first quarter. The one exception being the children of the players, who took the field pregame to show their fathers what real football players look like. It was the Mass Fury who would strike first though as Quarterback Corey Spencer attacked the Militia secondary with two deep passing plays before running back Brett Anctil found the endzone to make it a 7-0 game after the first quarter.
But the defense adjusted heading into the second quarter, switching to a zone coverage scheme to prevent the deep pass. This move was actually suggested by my inebriated friend who noticed that the corners were bailing at the line of scrimmage. Interestingly enough, after that he walked on the field and spent the rest of the game on the sideline.
The offense was finally able to get going in the second quarter, as quarterback William Rondo connected to receiver Chrystopher Jackson on a deep pass of his own. Rondo, who is the brother of former Celtics point Guard Rajon Rondo, had to scramble away from the pass rush before finding Jackson on the 50 yard throw. It was very cool to see (and hear the conversations) of the players, as they talked about how to beat the schemes of the Mass Fury and occasionally ran to the fence to answer questions from the kids.

Watching Quincy Militia football at Veteran’s Memorial is definitely a hidden gem in the Q. Good thing we here at Quincy Quarry dig up gems (and a whole lotta dirt ) for a living
Posted by QuincyQuarry.com on Saturday, August 29, 2015

Despite comprising only 40% of the crowd, I have no doubt that they brought 100% of the energy in the stands. Although this may be in part due to their sneaking onto the field to drink the players lemonade and eat their Starburst.
But after a missed extra point, Quincy still found themselves behind. The Mass Fury offense would threaten again, midway through the second quarter, but this time the Militia defense made the stop, thanks to a 4th down sack by outside linebacker Vladimir Joseph to take over on downs. Rondo found another receiver streaking down the sideline in Felipe Garcia to make it a 12-7 Militia lead going into halftime, after yet another missed extra point.
But the players had a lot of energy in spite of the miscues, running to the sidelines one player shouted hello to his mother, while another shouted “I LIVE FOR THE TRAP!” These missed opportunities would prove costly for the Militia. The 3rd quarter was a defensive battle until the last two minutes but another touchdown run for Anctil gave the lead back to the Mass Fury heading into the final quarter of play. But the Mass Fury defense was finally able to figure out Rondo and the Militia offense.

@QuincyMilitia I guess I spoke to soon… #Jinx

After several fruitless drives for the offense and the game clock rapidly winding down, the defense allowed one more touchdown. After a fourth-and-one conversion kept the Mass Fury drive alive, Anctil broke out for a 50-yard run to give him his third touchdown of the day, to extend the lead to 20-12. The Militia offense tried one more time to tie the game, but the Mass Fury defense stopped the offense and took over on downs.

But head coach Vaughn Driscoll is optimistic about the team’s future. “As soon as our offense gets clicking, we can make some noise,” he said. He added that his revamped team could make a run in the playoffs. In particular he feels good about the addition of Rondo at quarterback. “He’s a very vocal leader, something we needed at quarterback.”
“He gives us an edge where we can make noise,” he added. “It’s a big thing.” But the Quincy Militia are building something special. It was a cool thing to see the families out to support the team, and Coach Driscoll considers the whole team to be a family and told me I was more than welcome to come to the next team barbecue. After the fun, I had at the game, I may have to take him up on that offer. 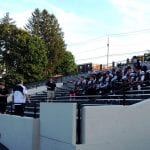 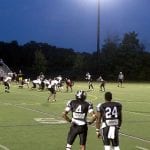 Check back tomorrow for the part two of this story, taking an inside look at the origin and growth of Vaughn Driscoll’s Quincy Militia. Tomorrow we are going to go a step even further with our multimedia coverage, taking the audio from our postgame interview and splicing it with the game footage we captured along with our own voicework! It’s gonna be a great piece, look for it tomorrow!!