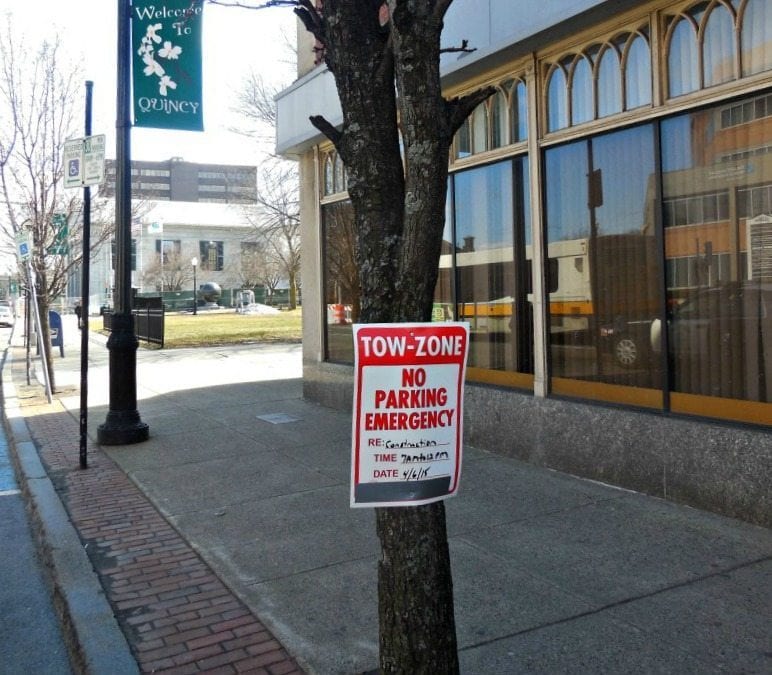 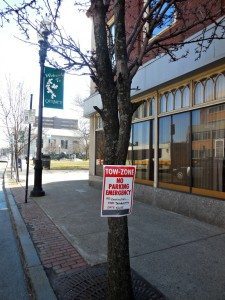 – News about Quincy MA from Quincy Quarry News.
Quincy Center parking emergency to occur on Monday?
Absent any advance notice, several blocks of Hancock were posted with paper tow-away no parking signs this weekend.
In turn, so caught unawares local merchants who are only just starting to perhaps recover from last winter’s snow-covered sidewalks, blocked delivery truck unloading zones and no street parking spaces were understandably outraged.
Now they are suffering complaints from clientele and then were unable to reach City Hall to try to find out what the Q was up as it was closed up tight for the Easter holiday weekend.
Further problematic, the City of Quincy’s website was unavailable and where impacted abutters to the Hancock Street realignment project were promised by City Hall coat holders that advance notice messages of pending construction work would be posted.

As noted in another Quarry story, Quincy Quarry was similarly unable to contact City of Quincy Information Systems Department coat holder nonpareil Vinnie Veritas to find out what the Q was up with the C of Q’s crashed website. 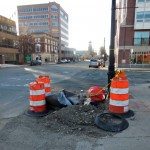 New stoplight base in the street!?!?
A Quincy Quarry News photo

Then again, it is only fair as well as only proper for Quincy Quarry to further spread blame given that advance notice of pending construction work on the City’s website before construction work was suspended for the winter last was only slightly better than erratic before it became all but not done at all when work resumed this spring.
Courtesy of Quincy Quarry’s many sources in places both high but mostly low, this latest City Hall shortcoming apparently arose after the traffic planning person who had been updating the pending construction announcements fled the City Planning and Community Department for a surely “greener” pastures after years of her all but being ignored by the long purportedly chauvinistic and clearly all but utterly not exactly diverse good ol’ boys of the embattled Koch Maladministration. 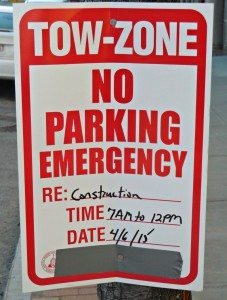 Further problematic, so too was the City of Quincy’s website and where impacted abuttors to the Hancock Street realignment project were promised by City Hall coat holders that advance notice messages pending construction work would be posted.
In spite of this latest Q-up by the deservedly embattled Koch Maladministration, Quincy Quarry continued to investigate matters until it uncovered even more about this Q-up:  the significant construction that is apparently giving rise to this parking emergency is not scheduled to commence until Wednesday April 8.
Quincy Quarry confirmed this even more absurd Q-up via the third party project coordinator who was hired by the City of Quincy per the mandate of the Massachusetts Department of Transportation, the project manager of this project given that this is a federally funded project and the feds know all too well what local governments are both not capable of doing as well as capable of misdoing.
QQ disclaimer