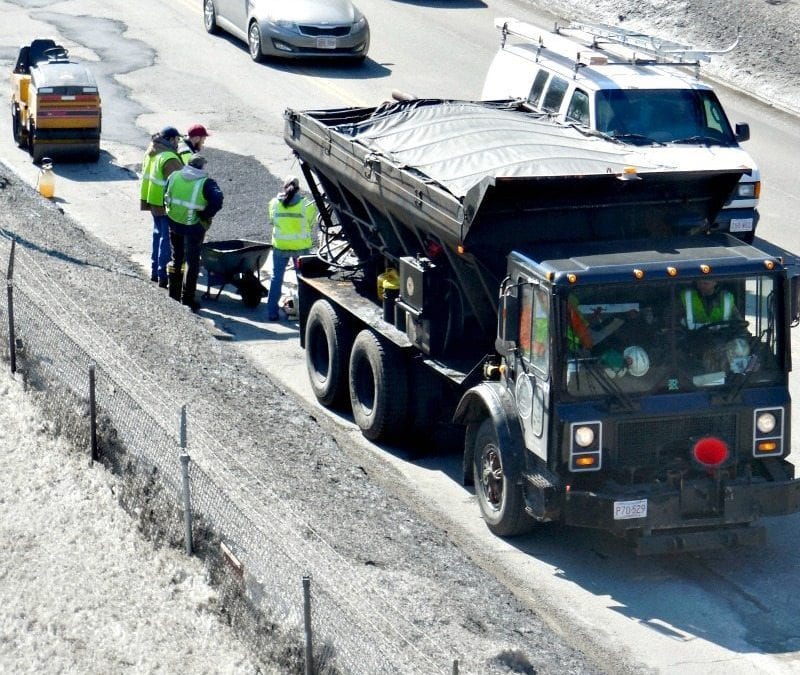 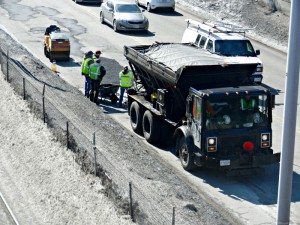 – News about Quincy MA from Quincy Quarry News
Quincy pothole season started early this year.
After all, in addition to a hard winter, it is an election year and the Koch Maladministration is thus desperate to keep its phony baloney jobs.
As also to be expected, the kickoff of the pothole repair season in the Q gave rise to a traffic tie up – this time on Burgin Parkway this past weekend, not to mention that it was surely thus but the first of many more traffic tie-ups yet to come as Quincy continues to ever so slowly dig out from a winter which is finally perhaps hinting at ending eventually. 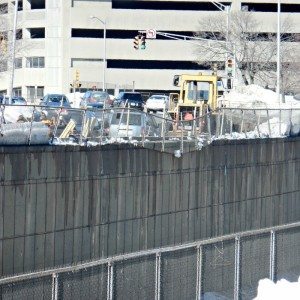 That and while surely so raking in even more overtime for only certain City of Quincy workers during a winter that has been fraught with suspicions of overtime grifting.
Unlike last weekend when snow removal workers appear to have damaged a fence between Burgin Parkway and the MBTA tracks, so threatening to yet again see the MBTA rail service crippled as well as backing up traffic on Burgin all the way to at least as far back as the Quincy Adams Red Line station, traffic was not as badly backed this time for a change.
At least it wasn’t all that backed up by the time that Quincy Quarry was finally able to arrive on the scene after receiving a tip about this latest tie up from one of its many loyal readers who had been stuck in traffic. 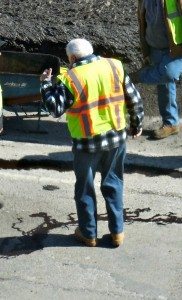 DPW’s 70-something #2 Overtime Man over the years and purported Nipster extraordinaire.
A Quincy Quarry News photo

Regardless, by the time a Quincy Quarry was able to dispatch a crew to cover the story, it found the DPW crew doing what (some, ed) DPW workers are known to do best: standing around a work site.
That and doing honey do list bakery runs and picking up dry cleaning.
In fairness, however, the Quarry did find that a number of potholes had already been filled when it arrived on the scene even if it found no one operating the City-owned road roller asphalt compactor.
In further fairness, neither does the Quarry know when or by whom these potholes were repaired.
Fortunately for Quincy taxpayers, Governor Charlie Baker reversed the outgoing Patrick Administration’s withholding of $100 million in Fiscal Year 2015 budget funding for local road work, otherwise known as Chapter 90 Program funding.
Unfortunately for a certain prominent City Hall denizen, there may not enough money leftover from the estimated $1.6 million of Chapter 90 funding earmarked for Quincy to help fill all of the potholes in the Q this year to then cover the cost of the anticipated repaving of the block where he lives after new underground infrastructure was installed underneath his street last year. 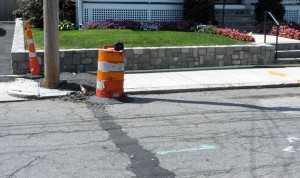 Fortunately, at least this resident has both one of the two newest sidewalks on his block as well as a less than seven year old fancy granite retaining wall.
QQ disclaimer