– News about Quincy MA from Quincy Quarry News
Quincy Mayor Thomas P. Koch apparently for once is actually practicing something that he has preached: clearing one’s sidewalk of snow is neither mandatory nor apparently even merely but common courtesy in Quincy.
While long viewed as enabling self-interests, enjoying personal extravagances at the public’s expense and taking care of friends in need are nothing new for Mayor Thomas P. Koch, one would assume that at least feigning appearances during this winter without any sign of ever ending would seem politic in what is – after all – a mayoral election year. 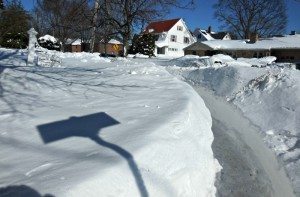 After all, even the variously as well as readily questionable local Commissioner of Public Works Dan “Spanky” Raymondi has had the good sense to at least affect keeping up appearances before he might head to Fort Myers for his planned and all but regular winter vacation to both defrost as well as catch the Red Sox at Spring Training.
Then again, Spanky probably has a good idea as to which local snow removal companies are actually capable as well as reliable.
In fairness to Quincy’s mayor in spite of his many shortcomings, Quincy Quarry was willing to give him some slack as his house is in densely developed neighborhood on a narrow street until it was reminded that he has two sons in high school and both have been out for weeks on School Snow Days. 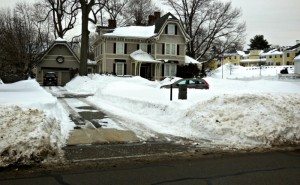 Apparently, “(D)o you know who I am?” has already moved on to afflict yet another Koch generation.
At the same time, Mayor Koch’s Chief of Staph has no excuses.
Not only does Staph’s manse front one of the wider residential boulevards in town and which features vast setbacks, his long, wide and even circular driveway is well-cleared whereas his sidewalk is nowhere to be seen.
As a result, an intrepid Quincy Quarry photographer had to defy death on the increasingly mean streets of Quincy to obtain photographic proof of Staph’s flagrant disregard for Noblesse Oblige both in general and during a mayoral election year.
This Quarry photographer was further put on edge as a large black Toyota SUV with a Koch for Quincy bump sticker that is believed to be the same one that regularly shows up late at City Hall appeared to have followed the photographer after his death-defying photo shoot. 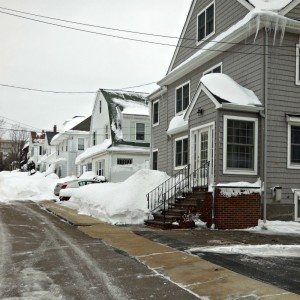 Arguable suspected stalking notwithstanding, Quincy Quarry still opted to sample the sidewalk clearing practices of other current City patronage hires as well as former mayors of Quincy in yet another display of the Quarry’s sense of fairness.
While Quincy Quarry is still wrapping up its upcoming series featuring these photographs to add to its already vast catalog of hard-hitting exposés, it can still as well as only properly tease this pending series by noting that not only do past Quincy walk the walk when it comes to clearing their sidewalks of snow, one former mayor went to the extra effort of also seeing to it that the street in front of his house was as well-cleared as the City Hall’s two parking lots.
At the same time, this former mayor would be the first to concede that his sidewalk has not been kept clear 24/7 as have the VIP parking lots at and entrances ways to City Hall been kept cleared down to the pavement around the clock, over weekends and even on City Hall Snow Days in the wake of the The Blizzard of 2015.
QQ disclaimer