Quad bogey for Quincy High Parcourse – how long will the sodding continue? 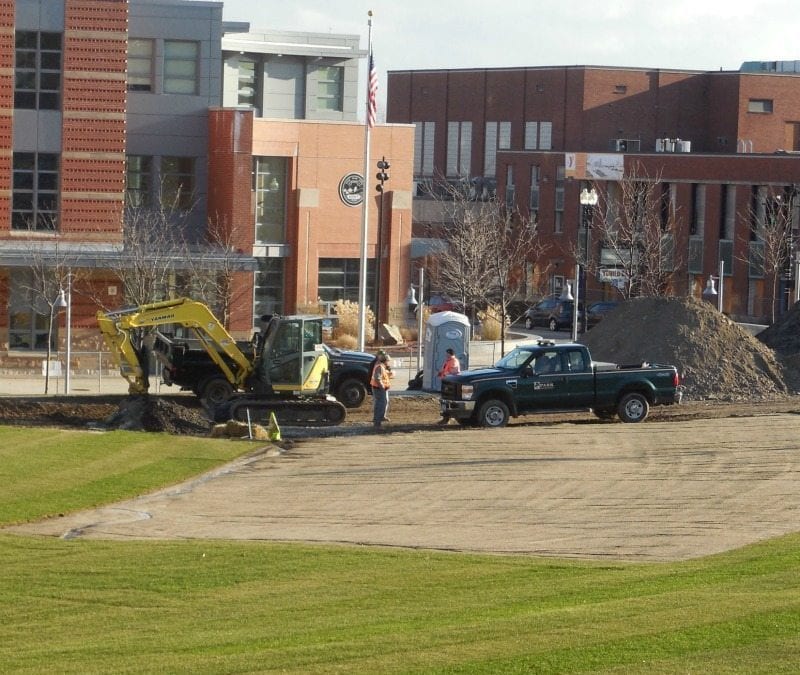 – News about Quincy MA from Quincy Quarry
Quincy Center’s long anticipated as well as so-called parcourse in front of new Quincy High School on the site of old Quincy High School continues to be far from fully sodded.
Quincy Park & Forestry Executive Chris Cassani said that “new sod should be laid at the site by the end of September. He said the project – to include a new stone wall, benches and parking spaces – should be mostly finished and open to the public in November.” 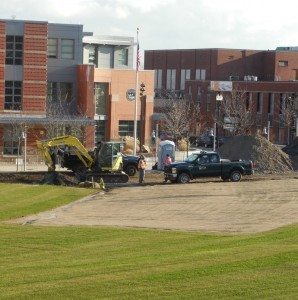 Par for the course coffee break. A Quincy Quarry News photo – click on for larger image.

It is now December and not only has the promised sodding yet to be finished, work on the “. . . should be mostly finished and open to the public in November . . . ” stone and other landscaping work needed adjacent to Quincy High School’s culinary program’s Presidents’ Café has yet to even but merely commence.
Even the parcourse’s parking lot long suspected to be named as a memorial parking lot on the site is far from completed.
While the City Council recently duly approved a resolve to commence the process for a memorial naming and as was predicted by Quincy Quarry over three months ago, problems and delays abound. 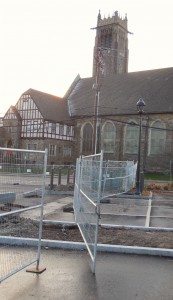 Not only is the lot is incomplete in what is also all but assuredly yet another City project also running over budget, it has no storm water drainage in place in spite of all manner of applicable codes and safety regulations.
Accordingly, the City – meaning local taxpayers – so face potentially expensive liability claims should anyone trip on any run-off resultant frozen patches on the Coddington Street sidewalk during the cold time of the year in New England.
Site security is further of concerns.  Gates have often been left open over the few weekends when overtime work has not scheduled for favored city workers as well as that long ongoing gaps in the mandatory work site safety fencing are numerous.
Fortunately, to date helicopter moms have yet to buzz city officials or contact Massachusetts Department of Public Safety officials over these clear and long present public safety risks.
Quincy Quarry did not bother to seek comment from the City Solicitor because he is currently swamped on the wrong end of all manner of legal disputes.

For but one example from among many, the possibility of a contempt of court ruling against the City if it fails to quickly effect payment of a court-ordered payment of an over million dollar – inclusive of interest penalties – on but a partial damages award payment due the Woodward School for Girls over years of City Fathers’ mismanaging and worse of the Adams Temple and School Fund.
The City is also facing a follow-on additional lawsuit likely to run into a 7 figure damages claim over related past abuses of Woodward .
This latest claim for damages is expected to be heard by the Supreme Judicial Court next year.
Additionally, a trial court ruling is expected any day on the all but certain to be expensive for local taxpayers matter of C-Mart vs. the City of Quincy.
QQ disclaimer