My Kingdom for T Parking Spaces 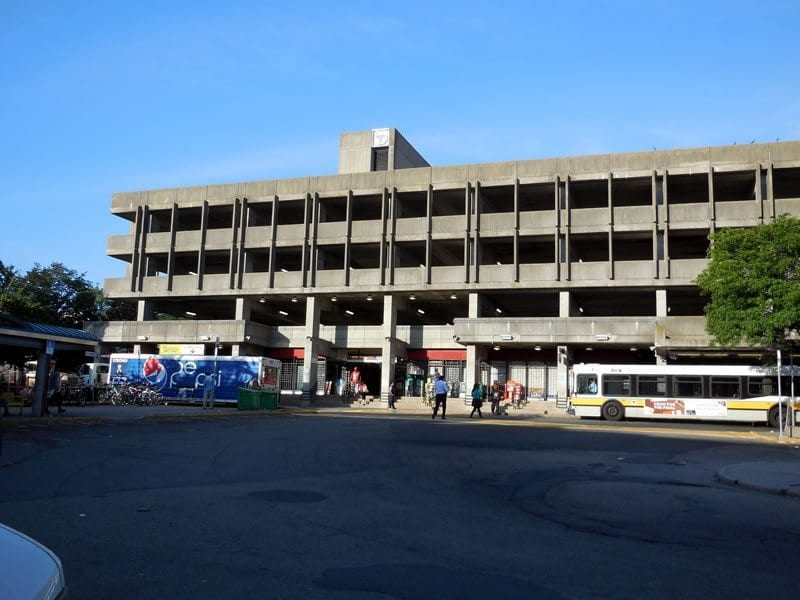 A bit over two years after the sudden closing of the Quincy Center MBTA station garage coincident with the Fourth of July holiday weekend, this actually not horrible looking example of Brutalism architecture is still standing empty – other than, that is, for the occasional homeless squat.
Still, to be fair, efforts have been made to effect its replacement.
For example, Parsons Brinkerhoff was selected as the winner of a million dollar contract to develop preliminary replacement design.  Unfortunately, at last report the necessary approval from the feds to reallocate a stray million leftover from another project to fund this design study is still pending.
Similarly, any further talk about a once highly touted possible $10 million in follow up funding for preliminary engineering design work funding has apparently yet to have actually gotten past overspun spin.
Perhaps sotto voce comments behind closed doors from mayoral brother-in-law State Senator John F. Keenan (D, Quincy) finally registered. For example, that there is virtually no way that using all of the 10 large – if it is even ever actually funded – on just a single local project is a proper use of so much money.
Similarly that the necessary $250 million to $350 million more in funding needed to actually build an 8 to 12 level structure at the base of the President’s Hill residential neighborhood ain’t gonna happen any time soon.
Even so, one cannot fault Mayor Koch for trying as he contemporaneously grifted himself appointment as the Chair of the MBTA Advisory Council, albeit it to no apparent avail.
Perhaps if the mayor had to rely on the T for transportation instead of long enjoying the use of a taxpayer-funded private vehicle he would know what Charlie has long known about the T.
Editors’ Note: Carl Woodward has extensive journalist experience with parking garages.

Carl Woodward is an investigative reporter best known for bringing down a crook. After retiring from active reporting after decades of multiple award winning stints at a major Washington DC broadsheet and elsewhere, Carl got the itch to get back in the game and the Quincy Quarry is thus “. . . pleased as punch” that he opted to join its “whack” staff.