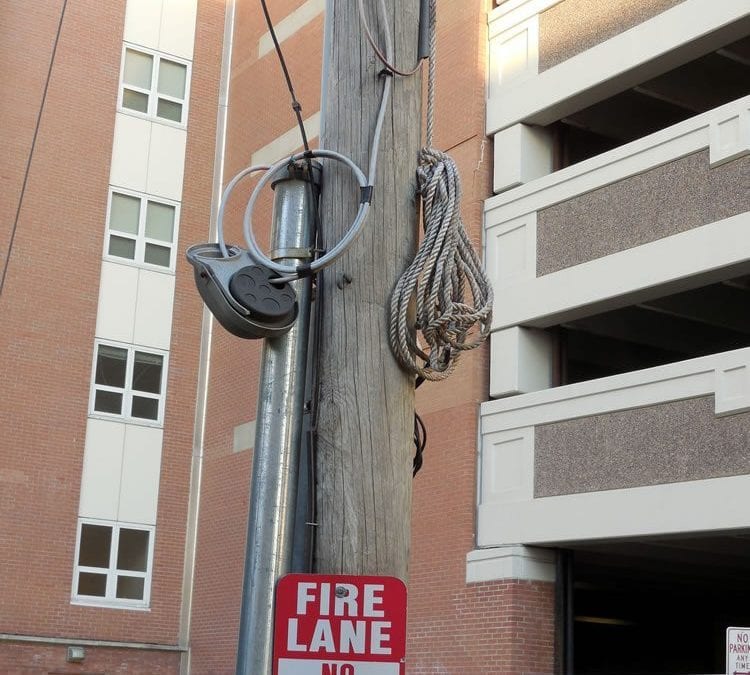 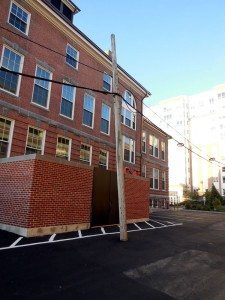 Anyone who watches Quincy City Council meetings knows that scapegoating utility companies for double poles or similar pole problems is one of the council’s favorite pastimes.  As such, it will be interesting to see what it says – if anything – about the Koch Administration’s project management of the months late, still unfinished and at least $500,000.00 over budget authorization Coddington Hall renovation project.
For example, the crooked telephone poles behind the Coddington Hall building.  Given that bad drivers eventually pay the bill for a new pole when they break an old one, why couldn’t the City see to cover lining up a new one on the front end?
Other crooked problems include that many of the thousand dollar plus large evergreen trees planted in a back corner of the project site are variously askew and in ways that most private project owners would find unacceptable.  The rest of the site’s landscaping is similarly rife with rushed as well as some still incomplete work.
Additional and more disconcerting problems include that the required by code hardwire firm alarm system feed into the building appears to be jerry-rigged – even per “cable guy” standards – and perhaps thus deficient.
Per one real estate development company project manager all too familiar with city building inspections, “(a) weather head belongs on the conduit so water cannot get inside the connection.  (It is a)mazing what they overlook when it is a City Building.”
Additionally, the cable itself is narrow gauge material.  While perhaps sufficient per local standards, it was further noted that the use of such a “budget” wire as part of a fire protection system for such a sizeable building is penny-wise but potentially millions foolish. 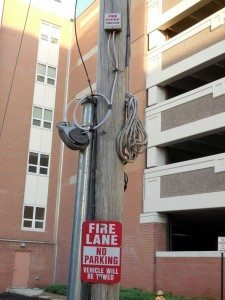 Further problematic is site storm water management.  An estimated 75% of water runoff from the front parking lot that flows down to the edge of the lot abutting the Coddington Street flows out one of the three pedestrian entryways – first onto the sidewalk and then into the gutter – instead of properly into the but single storm drain in a corner of the lot.
While this code violation is a currently little more than a rainy day nuisance, code violating storm water flow will likely turn much of the Coddington Street sidewalk into ice covered sheet following winter storms.
As any such safety hazard would be the result of clear code deficiencies, the City of Quincy would thus be open to damage claims – with taxpayers stuck with the final bill.
Further, the Quincy Quarry has been provided with documentation that virtually all of the appropriate City of Quincy officials have been advised by a concerned local activist of the concerns about storm water mismanagement at Coddington Hall. As per the Administration’s standard practices, however, no response has yet to be provided.
The private sector project manager further felt it was unlikely that any private construction project with such an assortment of readily obvious construction, code and design issues would be approved for an unrestricted occupancy permit.
As such, why then was a public construction project allowed to be opened up for use – especially in the wake of the myriad as well as considerable code deficiencies at the Quincy Housing Authority?
Perhaps even more importantly, one can only wonder how many problems may lurk elsewhere on this 8 figure renovation project.
Similarly, is more of the same pending on the still in progress renovation of old City Hall?

Carl Woodward is an investigative reporter best known for bringing down a crook. After retiring from active reporting after decades of multiple award winning stints at a major Washington DC broadsheet and elsewhere, Carl got the itch to get back in the game and the Quincy Quarry is thus “. . . pleased as punch” that he opted to join its “whack” staff.